John Mayer is back in our lives after a string of “dumb interviews” led to a self-imposed retreat from the spotlight to take time to grow up. Thank you for setting an example, John. If only some other celebrities, whose interviews put your “dumb” ones to absolute shame, had had your integrity… 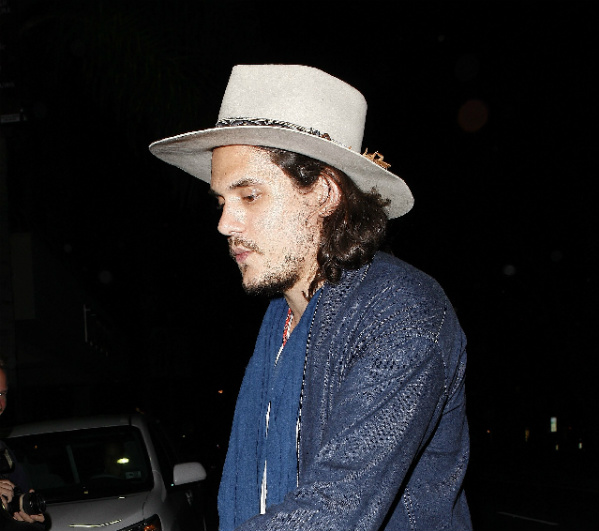 If you’ve spent the last couple of years wondering where on Earth John Mayer had gone to, you’ve finally gotten your answer. The singer has just emerged from an extended self-imposed hiatus from the public eye to collect himself and grow up already. After a string of what he called “dumb interviews” with Rolling Stone and Playboy (in which he famously went into great detail about his compulsion toward Jessica Simpson, whom he called “sexual napalm”), John decided to take a breather and step out of the spotlight. Now he’s finally back, ready to show us how he’s matured and to seranade us once again. Welcome to your manhood, Johnny.

We must admit that while he was gone, we definitely missed the journalistic excitement John provided, not to mention those crazy faces he makes while he plays guitar. But we are definitely relieved he decided to go off and regroup in private. Clearly John cared enough about his reputation to recognize that for him to sustain any kind of public respect or success, he needed to concentrate on becoming the kind of person who says insightful things in interviews, as opposed to objectionable, I-can’t-believe-he-just-said-“sexual-napalm” things.

John’s example is one that plenty of celebrities might have benefited from following. Too often celebrities participate in interviews that get derailed by their inappropriate or cringe-inducingly awkward responses. If more stars took some time to get in touch with themselves a la John Mayer, who knows what kinds of eloquence they might spout (though we must say we do appreciate questionable responses for their entertainment value). Below we discuss some of the all-time worst celebrity interviews that should have been followed by a mandatory retreat from the spotlight:

Many people regard this monumental interview as the beginning of the end of Tom Cruise as we once knew him. Who could ever forget that infamous couch jumping fiasco as Tom wildly proclaimed his undying love for his then new girlfriend, Katie Holmes? Even Oprah, who has seen just about everything, didn’t quite know how to respond to Tom’s erratic behaviour. Leading up to that climactic leap onto the furniture, Tom was distracted and giggly throughout the interview. The storm of mockery following the interview was enormous, but rather than retreat quietly into his cave until it all blew over, Tom became more visible than he had ever been before, welcoming an even larger barrage of criticism, which he still has yet to live down seven years after the fact. If he had pulled a John Mayer, maybe Tom wouldn’t have become the crazy laughingstock he is today. Mostly we just hope he sprung for a new couch for Oprah.

Canadians may be polite, and sure, sometimes we’re mild, but calling us “mashed potatoes but [with] no gravy,” Billy Bob? Those are fighting words. That, or the words of a petulant child, which is apparently what Billy Bob was channelling during his famous interview on the popular CBC radio program Q with host Jian Ghomeshi. Right off the bat, things were headed for disaster when, during his typically eloquent introduction of his interviewee, Jian referenced Billy Bob’s Hollywood career — something that Billy Bob, there to talk strictly about his music, apparently insisted not be mentioned during the interview. Jian explained that he was simply providing a context for the listeners, but Billy Bob wouldn’t have it. His reponses to Jian’s questions ranged from unintelligible and short to unintelligible and meanderingly long (of course, his crack about Canadians being bland was perfectly clear). The interview went viral immediately. People all over the world could not believe how poorly Billy Bob conducted himself and applauded Jian for his composure and professionalism throughout the interview. How we wish Billy Bob had just gone away after that. But alas, he had a tour to complete, not to mention a concert the next day in — you guessed it — boring Canada.

The end of the story is that it was all an act. But that wasn’t made clear until well after the public started seriously questioning Joaquin Phoenix’s mental stability. The generally clean-cut, Oscar-nominated actor started to show signs of peculiarity when he grew a substantial beard and decided to launch a rap career, apparently bored of acting. Then came his interview on the Late Show with David Letterman, where all hell broke loose. There to promote his new (and, as Joaquin said, his last) film Two Lovers, Joaquin appeared dishevelled and stoned out of his mind. He gave Dave one-word answers, and when the audience and Dave eventually began laughing at his baffling behaviour, Joaquin grew increasingly hostile. It was perhaps the most uncomfortable 10 minutes ever witnessed on late night television. Since then, it was revealed that Joaquin was, as many people suspected (though their suspicions were thwarted by this particularly convincing interview and Joaquin’s ability to so adeptly stay in character), pulling our legs for the sake of a project, the documentary-style film I’m Still Here. Joaquin returned to Letterman to formally apologize if his behaviour offended Dave in any way. Fortunately Joaquin’s bearded alter ego did withdraw from the spotlight, where we hope he remains forever.