American Idol who? Kelly Clarkson has moved on from the being the contestant to being the judge, and she says her new judging role lets her mentor upcoming musicians while getting to do what she enjoys most — performing. 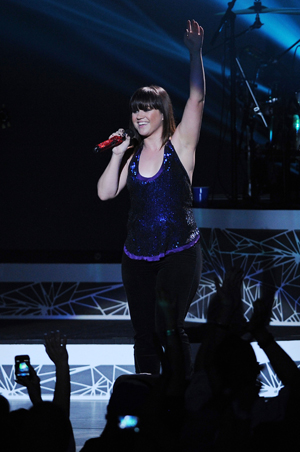 She may be a former American Idol winner, but Kelly Clarkson has her sights set on another reality show — her own!

The “Mr. Know It All” artist was all smiles when talking about her judging gig for her new reality singing competition, Duets, at an Entertainment Weekly ABC party this week, and she says that even though she may be an A.I. alumnus, her show is completely different from every other similar show on television — completely.

“It gives the kids an opportunity that I didn’t have when I did Idol. Nobody really was guiding us or helping us,” says Kelly at the party, according to E! Online. “So that kind of turned me on about this show. Also, I love that we get to compete with them so we’re not just watching. I have to be honest with you, it’s way more challenging than I thought it was going to be!”

The show, which airs on May 24, puts the judges on the stage, as each judge is required to choose two contestants, mentor them and then perform duets with them. Along with Kelly Clarkson, joining the show’s judging panel are R&B crooner Robin Thicke, John Legend and Jennifer Nettles.

“They benefit from our advice and our counsel, but I think they also are a little intimidated that they have to sing with us onstage,” says John Legend.

We think the real intimidation may be more from The Voice, The X Factor and American Idol, which are going to have to compete against this new show. But there is always room for some friendly competition in the world of reality singing shows, right? Yet Kelly isn’t afraid to admit that her new show is different and — hint, hint — possibly better.

“It’s a lot more work than people have to do on Idol or The Voice!”