She’s a lean, mean, healthy fighting machine. The music diva has taken a healthy step forward in her life and says she feels great about the decision. 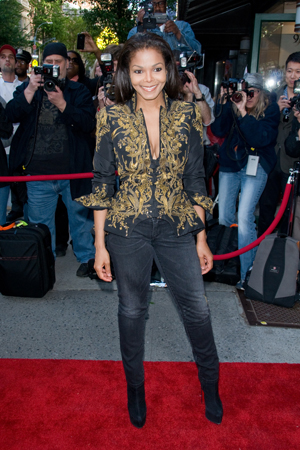 Janet Jackson is stepping away from the scale for good.

The famous Jackson sister and Nutrisystem spokeswoman is glad she is eating right, losing weight and living a healthy lifestyle, but unlike most dieters, she’s not concerned with what the number on the scale reads.

“I don’t know how much weight I’ve lost, only because I stay away from the scale,” says Janet to People. “I don’t think [stepping on the scale] is healthy. You’re setting yourself up to fail, and women’s bodies fluctuate every month — certain time of the month in particular, we bloat a great deal.”

Finally a celebrity woman who speaks the truth about losing weight and doesn’t make it sound like every time they walk out on the red carpet they have to look slim and flawless.

The 46-year-old musician credits her healthy eating habits to the nutrition system, saying it allows her to eat without starving herself, and she even has an exercise routine to help her stay on track.

“If I’m getting ready for something like a tour, I work out six days a week. I like to switch it up. I may go for a run or bike,” she says.

Janet is really busy taking care of herself, huh? No wonder she couldn’t be a judge on The X Factor. But Janet doesn’t seem to mind telling the entertainment magazine that putting in the effort is definitely worth it.

“I’m really happy with the way that I feel at the moment. I feel very good, and it’s been a long time since I’ve felt this good.”