We all know Robert Downey Jr. is beautiful and in demand, but we had no idea it was even possible to earn this much money for one film! 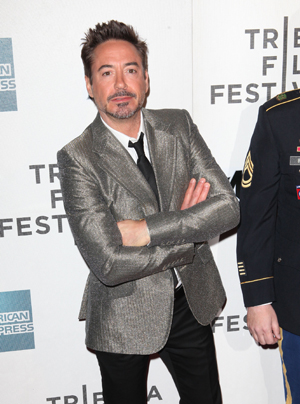 So, when you hear about how much celebrities earn on the regular, it makes you want to cry, right?

If you said yes, then you’d best be reaching for those tissues…

According to The Hollywood Reporter, the actor is pocketing — and those weak of heart should avert their gazes at this point — $50 million!

Oh yeah, it physically hurts us too.

Chris Hemsworth, Mark Ruffalo, Chris Evans and Jeremy Renner will be allotted about $2 to $3 million, while Scarlett Johansson and Samuel L. Jackson will make about double that because of signed deals for appearances in future Marvel films.

So why is Robert Downey making so much more?

In layman’s terms, he’s a money-making god. The first Iron Man grossed about $585 million worldwide. Downey brokered a deal to have a forkful of Marvel’s profit from future film endeavours, in which he will play the same character. Not a bad deal.

The actor’s rep has not yet made a comment.

What do y’all think?

More on The Avengers