Canada is just such a lovable country, but can we impress royalty with our cuisine? Toronto’s Cowbell restaurant is aiming to cater for Prince Charles when he visits the city on his four-day Canuck tour. 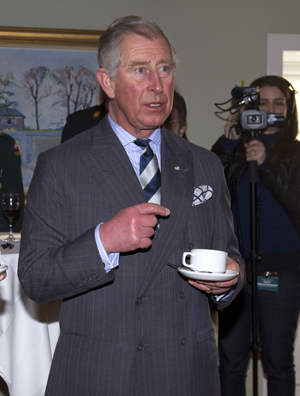 While Canadian cooking may not be world famous per se, we will definitely put our best foot forward when Prince Charles visits Canada on a four-day tour.

The prince is set to be in Toronto on May 22 and 23 as part of his brief visit to Canuck-land. The royal will not only enjoy examining the city’s troubled neighbourhoods and homeless shelters and shaking hands with thousands of enthusiasts, he will also be catered to by Toronto’s Cowbell restaurant.

“Cowbell is not hosting, but cooking for a ‘VVIP’ cocktail reception at a not-yet-revealed location,” stated Cowbell chef Mark Cutrara.

“I’ll be doing Cowbell-style Canadian dishes with an eye to 1812 and of course a nod to her Majesty’s jubilee. Canada will spend $7.5 million celebrating the 60th anniversary of Queen Elizabeth’s ascension.

“We are excited about this opportunity, as the prince is a slow foodie.”

Cooking for royalty is stressful enough, especially when you are representing your country. Hopefully Prince Charles will not forget to bring his facial expressions with him… Usually he’s pretty monotonous with them pesky emotions.

What do y’all think? Can we impress the prince?