Apparently we will not be seeing a Doritos-coloured Snooki for a while. The Jersey Shore star has given up tanning until the baby arrives. 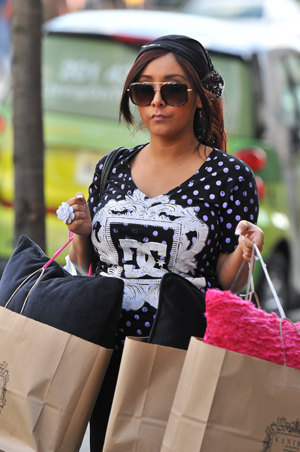 The Jersey Shore star revealed that she will not be tanning whilst carrying her future offspring and has, in fact, not tanned since August. Shocking, we know.

Snooks tweeted a photo of herself on Monday — looking rather non-orange — sombrely accompanied with, “Whoa look at this non tan.”

Should we expect to see a pale Snooki anytime soon?

Naw, girl. The reality star assures the populace of the world that it would never happen.

“When I tan once, it stays forever,” Snooks told E! News. “I have that natural dark skin. Even if I didn’t tan for two years, I would still be tan.”

It looks like Snooki is taking this whole pregnancy thing seriously. Good to know. If only someone could conduct research on the negative effects of leopard print on pregnant women… That’d be great.

There ye have it. Thoughts, fears, hopes? Sharesies.