Be warned, people: Celebrities do not want you using their faces — at all. Hilary Swank is the most recent celebrity to be involved in some legal drama, after her famous image was used without her consent. 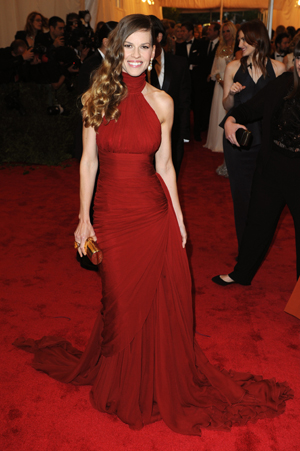 No one uses Hilary Swank‘s face and gets away with it.

The Oscar winner, famous for her roles in Boys Don’t Cry and Million Dollar Baby, is not so pleased with a home audio company that is using her million-dollar face without her permission. According to The Hollywood Reporter, Hilary has a filed a lawsuit against Robert’s Home Audio and Video, a business in Los Angeles that has been using the actress’s image and name to advertise its company.

“Defendants did not ask for or receive Ms. Swank’s permission to use her photograph, identity or persona in the advertisements or otherwise to associate with Defendants’ companies or to market Defendants’ commercial products or services,” says the complaint, which was filed last week, according to The Hollywood Reporter.

Now, everyone should know by now that in no way is it right to use a celebrity’s mug for their product without asking first. It’s just bad business that’s probably going to end up costing you more dough instead of making dough off the celebrity.

Hilary isn’t the only one whose celeb face has been misused and misrepresented by a company. Both George Clooney and Julia Roberts are suing two audio-visual companies for using their famous names and faces to sell movie projectors and entertainment stereos. Reality queen and diva Kim Kardashian also got her lawyers ready when a Mexican doctor used the famous socialite’s face on a billboard in Mexicali to advertise his cosmetic procedures.

Sigh… Here’s some advice for whoever may want to use a celebrity’s face without permission: Just don’t do it!