The new season of The Bachelorette is here, and judging from the premiere, it’s clear a dramatic and exciting season lies ahead. Emily Maynard is back after her relationship with former Bachelor Brad Womack didn’t work out. The single mother of 6-year-old daughter Ricki is ready to find love as well as the perfect father figure for her little girl. 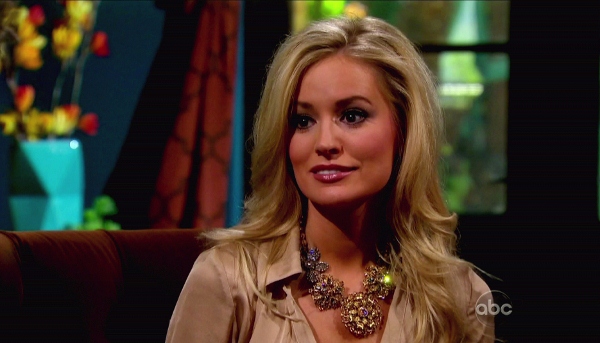 He is bound to be high on Emily’s list of potential candidates from the moment he mentions he’s the single parent of a 12-year-old boy named Austin. And then when he goes ahead and gives her a letter written to her by his son, well… that just guarantees him the first impression rose!

Upon hearing that one of the contestants is a race car driver — just like Emily’s former husband, who passed away — one might think someone’s out to toy with Emily’s emotions. But from the second Arie walks in, it’s pretty clear he is going to make it far in the competition. It’s downright squeal-worthy when he nervously asks Emily whether his career will bring back painful memories and scare her away. And there is a unanimous sigh of relief when she assures him she loves the sport and wisely remarks later that “he’d be hot in a race car.” Too true, Emily. Too true.

As a pro sports trainer from Augusta, he seems like just your average Bachelorette contestant. That is until he pulls off what may be the cutest introduction in the show’s history when he tells Emily he wrote down some notes. He pulls out a paper that on one side says “you are beautiful” and on the other reads “I’m so nervous.” Does it get any sweeter?

A luxury brand consultant who flies in on a helicopter definitely doesn’t spell down-to-earth father figure. Between his dramatic entrance and blatant refusal to leave his conversation with Emily when asked to by another contestant, Kalon’s chances of sticking around for anything more than a little bit of ridiculous drama seem slim to none.

The dancer/emcee/entertainer makes his appearance by dancing with a boom box and wearing a lime-green shirt. But he really makes his personality known when he starts gossiping about who’s talking to Emily and soon gets into a heated discussion with Kalon. If Bachelorette history is any indication, the drama queens might be kept around for entertainment purposes for a few weeks, but their lucky streaks don’t last forever.

It’s understandable that these guys want to leave a lasting impression on the Bachelorette. But bringing a giant egg that you promise to care for throughout the competition as a sign of your love seems like a bit much. He definitely appears to be a good guy, but Bachelorette history indicates that winning over the lady of the hour and making it all the way to the end after such an over-the-top act isn’t likely in the cards.