Canada Sings is about to enter its second inspiring season. We proudly welcome the return of this heartwarming talent show that represents what’s great about being Canadian. 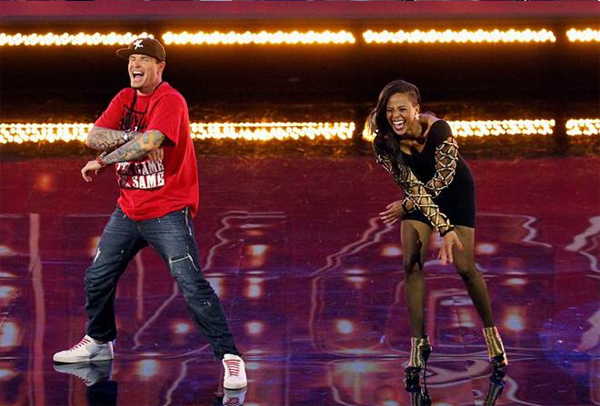 Here’s the thing: We love us some singing competition shows. Watching a bunch of extraordinarily talented people put everything on the line to make their dreams come true is some highly entertaining television. But while we do enjoy watching and listening to those musical freaks of nature earnestly sing their hearts out, there is an element of darkness involved in these shows that we can’t ignore. With weekly eliminations and each contestant ultimately aiming for a strictly personal victory, cutthroat competition shows like American Idol and The Voice kind of start to remind us of The Hunger Games, except with a little less blood.

Leave it to the great nation of Canada to turn the survival-of-the-fittest singing competition genre into something far more friendly and inclusive. Canada Sings, which begins its second season tonight, is more interested in the good that can be achieved through music than it is the glory. The show’s premise is this: Two Canadian workplaces’ glee clubs face off in a competition with a $25,000 reward (up from $10,000 in the first season) to be given to the charity of their choice. The performance experience and confidence of each vastly different glee club’s members vary, but what they all have in common is a collection of extremely generous and motivated individuals. Each episode sees two new teams of performers from across Canada competing against each other, with a winning team chosen each week.

What’s so inspiring about Canada Sings is not necessarily the indescribable riffing and whistle tones of its competitors (though some glee club members are pretty spectacular!), but their undying positivity and enthusiasm. Many of these people have not only never performed in public before, but in some cases, have never really sung in front of anyone. To watch a bunch of waitresses from a local restaurant in suburban Calgary overcome crippling stage fright and band together on national television to raise money for a good cause kind of makes you wonder what exactly they’re doing over at The Voice.

It also helps that these glee clubs have some serious pros helping them out. Each team is assigned a singing coach and choreographer — leaders in their fields — who help the groups put together incredible showstoppers. But these four coaches (Sharron Matthews, Christian Vincent, Kelly Konno and Scott Henderson) are not just responsible for turning a group of firefighters into singing and dancing machines: Through their work with the glee clubs, the coaches become sources of moral and emotional support, helping petrified people who would rather die than sing onstage, let alone in front of the whole country, work up the courage and gain the confidence required to be the best performers possible. Everyone, no matter his or her experience, is a star on Canada Sings; there is no judgment.

That’s actually a lie, since the show does boast three celebrity judges who ultimately choose a winner. But the panel, consisting of songstress Jann Arden, choreographer Laurieann Gibson and Vanilla Ice (yes, that Vanilla Ice!), never channels Simon Cowell in assessments of the performances. They are always positive, but not the grating, Paula-Abdul-on-American-Idol kind of positive. While they acknowledge the lengths these people have gone to and the personal hurdles they have overcome just to stand on that stage, they still provide each team with valuable, constructive feedback. They’re not so much judges as they are supportive mentors (who also happen to decide on the winning team).

It is more rare than we’d like that a Canadian television show set a standard that other countries (cough, America, cough) might stand to emulate. Canada Sings uses the cliche that Canadians are nothing but kindly folk ready to lend a hand to its greatest advantage, resulting in a more entertaining and heartwarming singing competition than any other on TV. Which we will definitely be watching again this season.

Kanye West will appear on Keeping Up with the Kardashians
Jon Hamm’s gone viral and we’re infected!
Howard Stern says Britney will be a “train wreck” on X Factor