Well, people always change their minds. Case in point: Ashley Tisdale and Scott Speer have returned to the realm of coupledom after a brief breakup. 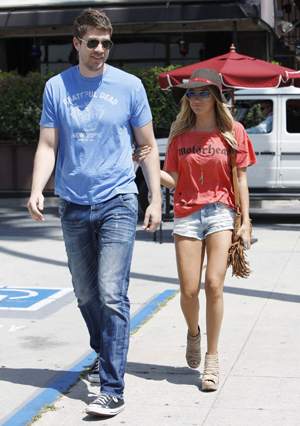 This breakup was so short, we barely even noticed it…

But nonetheless, Ashley Tisdale is back on with Scott Speer. The 26-year-old High School Musical actress and 29-year-old Step Up Revolution director broke up back in December but reportedly reconciled a few weeks ago.

The newly refurbished couple has been out and about of late to confirm their rekindled row-maw-nce.

Cute, cute, cute! But just judging from the photo, how short is Ms. Tisdale, or rather, how tall is Mr. Speer? Now that’s what we call polar opposites (get it?).

In Hollywood, more often than not, when a couple breaks up, they avoid each other more dedicatedly than a dog avoids a bathtub. So it’s soothing to our frayed nerves to see these two un-break up and frolic through fields of daisies once again.

What do y’all think? Fair match, or if it’s broke, get a new one?