Russell is cutting all interaction with his soon-to-be ex-wife, and that includes any form of social media. The actor has reportedly cut his connection to the pop star on Twitter after almost four months since announcing their divorce. 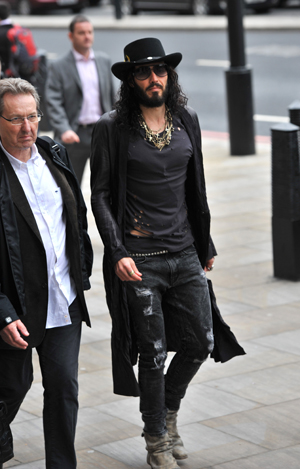 Russell Brand is moving on from his ex again — this time virtually.

The Get Him to the Greek star has unfollowed his soon-to-be ex-wife, Katy Perry, on Twitter, according to Us Weekly. The former celebrity couple, who announced their divorce in February, are no longer connected in the social media world after Russell decided to click the unfollow button on his former love.

How sad is that? Russell will never read Katy’s 140-character thoughts ever again and vice versa.

Yet this social media split was bound to happen, since Katy stopped following Russell as soon as they split earlier this year, and it is possible that seeing Katy with Florence + the Machine guitarist Robert Ackroyd at Coachella last month probably pushed a few of Russell’s buttons.

Last week it was reported that the 36-year-old was having regrets about divorcing the “Part of Me” artist and that he even sent an email to her saying he wished the relationship had worked out.

“Russell was ‘seething with jealousy’ when he saw pictures of her with Rob. He apparently feels he gave up on their relationship too easily,” says a source close to Russell via Grazia. “It’s fair to say that Russell only wishes Katy happiness, but perhaps he should have realised just how special his wife was when he was married to her rather than five months later.”

Well, Russell, it’s not too late yet to get back on Twitter and follow Katy Perry once again.