Jon Hamm’s Rookie web video is the reason we love the internet. He joins the ranks of some pretty heavy web video hitters with this thing, and we list a few of our favourites! 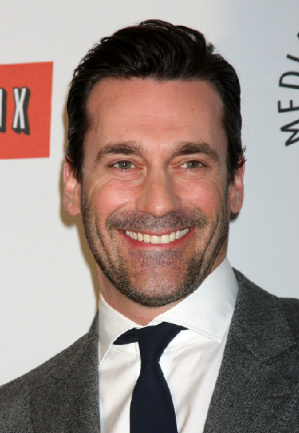 Sweet baby Jesus, thank you for Jon Hamm. Not only is he devastatingly handsome and exceedingly talented, but he’s also apparently an expert on dating, especially when it comes to the love lives of teenage girls. Rookie, a quirky online magazine for young, hip girls, recently posted a video of Jon Hamm fielding questions from its readers. His no-nonsense answers to 16-year-old girls’ queries about unreciprocated love and farting etiquette are delivered completely straight-faced; it’s pure gold.

We get the feeling that, with the feedback and hits this video is getting, we’ll be seeing quite a bit more of Jon Hamm shelling out the dating advice. Hopefully it’ll become a web series, and then who knows? Maybe he’ll get his own talk show out of this.

Jon joins an elite group of celebrities who have captured our hearts and tickled our funny bones with their totally out there, wildly entertaining viral web videos. Get ready to join these other web winners on the viral video Facebook wall of fame, Jon!

Hollywood’s reigning super-weirdo, Zach Galifianakis, isn’t just good for playing the bearded one-man wolf pack in comedies. His talk show, Between Two Ferns, is easily some of his finest work. In its many episodes, Zach is joined by some big-time celebrities — Bradley Cooper, Steve Carell and Natalie Portman, to name just a few — and proceeds to engage them in the most cringe-inducing interviews known to man. He is hostile and unwelcoming, and his famous guests do a great job of playing along. It’s almost impossible to not watch all of them in one sitting, and we encourage you to do so. And in case you were wondering about the name, Zach interviews his guests as they sit between two ferns.

Now, we can’t give NPH all the credit here, since this magical web series was conceived and executed by Joss Whedon. But we can give Neil serious props for his star turn as the titular Dr. Horrible. In the three-act series, Dr. Horrible battles his arch-nemesis, Captain Hammer, for the affections of the lovely Penny, whom they both love, while also trying to be accepted into the Evil League of Evil. We won’t give away the ending, but it is bittersweet. And very funny. Oh, and did we mention that it’s done as a musical? That’s right: Not only do you get NPH starring as an evil(ish) villain, but you get to hear him sing about it. This web series became so popular that they eventually released a DVD, whose commentary was also sung. Not that How I Met Your Mother didn’t help make him super famous, but we’re pretty sure Neil owes a lot of his popularity to Dr. Horrible.

Here’s a scenario that web series creators only ever dream about: a web show that is so popular, it gets picked up by a television network. That’s what happened to Lisa Kudrow and the team of Web Therapy, in which she stars as therapist Fiona Wallice, who conducts her sessions via iChat. On the web series, she was joined by other funny ladies, such as Courteney Cox, Molly Shannon and Julia Louis-Dreyfus. Showtime hopped right on board this hilarious showcase of the very talented Lisa Kudrow and welcomed it to its network. Why can’t all therapists be like Lisa Kudrow?

Will Ferrell, Adam McKay — The Landlord

This is easily one of the best-loved web videos to date. In it, Will Ferrell is harassed by his landlord, 2-year-old Pearl McKay (co-writer and director Adam McKay’s daughter). The adorable toddler spouts ungodly profanities at Will for not having paid his rent and is only quelled after she takes Will’s beer. The sheer absurdity of it all — Will being threatened by a 2-year-old, the absolute filth that comes out of her precious face — is some of the most entertaining stuff on the internet. The video became such a viral sensation at 77 million views (and counting) that Will and Adam followed it up with an outtakes video — almost as good as the actual video itself — and a second video called Good Cop, Baby Cop, featuring Will (the good cop) and Pearl (the very aggressive baby cop). Will Pearl ever grace our computer screens again? We can only f****** pray.

What happens when quirky becomes the new normal?
Our favourite Tim Burton-Johnny Depp collaborations
Brad Pitt’s getting in touch with his feminine side