No lifting heavy weights here. The actress is trying a different exercise routine that is both empowering and sexy, and she’s showing everyone that this young Hollywood starlet is growing up. 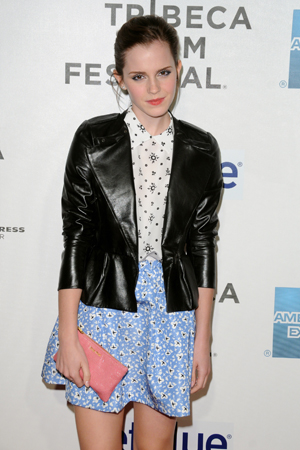 Wow, it looks like Hermione is all grown up and has some sexy dancing skills to prove it.

Harry Potter actress Emma Watson has reportedly taken up a new hobby that is getting everybody’s attention. According to The Sun, the young Hollywood starlet has signed up to take pole-dancing classes while on the set of her new film, The Bling Ring, and a source says the 22-year-old is really enjoying the sexy activity — a lot.

“Like on all film sets, there’s often so much time spent doing nothing. One of the other actresses on the set has been pole-dancing as a sport for a while, and Emma decided to give it a go as well,” says a source to The Sun. “She’s amazed with the results because it has toned up her body so well.”

So I guess fencing isn’t in anymore…

We can completely understand why Emma would be drawn to trying such a playful and sensual exercise that is both fun and makes you fit. I mean, remember Demi Moore in Striptease? Enough said.

But it isn’t just about getting fit in a different way that attracted the actress; it’s also the fact that it allows her to try something new and shed her little girl persona that we’re used to in the Harry Potter films.

“She never thought she would enjoy it, but she finds it quite liberating,” says the source.

No word yet on whether Emma plans to take up the artful pole-dancing skill after she’s done filming her movie, but we’re pretty sure her new beau, Will Adamovicz, is probably hoping for the privilege to see his girlfriend demonstrate her new moves.