Tim Burton and Johnny Depp mark their eighth film collaboration with Dark Shadows, which opens this weekend. We talk about the very special bond between these two talented men and list our top three favourite Burton-Depp creations! 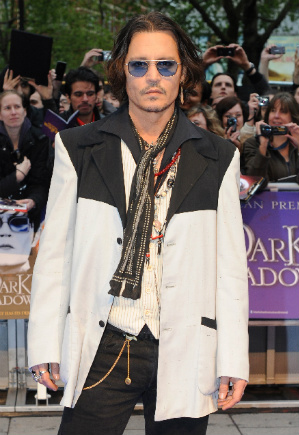 …and Dark Shadows makes eight! Yes, ladies, Tim Burton and Johnny Depp are at it again, with Dark Shadows, their eighth film collaboration. Eight films! Many Hollywood couples could learn a few things about what a serious commitment looks like from these two cinematic superstars.

And it really is the two men’s little baby of a project: Johnny Depp, who was a huge fan of the vampiriffic 1960s soap opera on which the movie is based, bought the rights to the cult-adored show. He both produces and stars in the movie, portraying the immortal Barnabas Collins. Naturally director Tim Burton, also a fan of the Dark Shadows soap opera, would provide just the right collaborative seed to make this project blossom into the brooding, darkly comic film it was destined to be. And so the men have united, as they so often do, and the world awaits as their eighth creation, finished gestating, is delivered this weekend at a theatre near you.

Johnny Depp and Tim Burton’s film collaborations have rarely missed the mark. They seem to be the perfect complements to each other: Johnny Depp, whose unconventional, broad and brilliant acting skills demand a director who can properly showcase his talents, is the perfect muse for Tim Burton, whose dark (and darkly comedic) vision requires an actor who can find that very fine balance between Gothic tragedy and levity. Narrowing down which of their films we like best isn’t what we’d call an easy task, but we’ve done our best below with our top three favourite Tim Burton-Johnny Depp movies.

Not just their first collaboration, but some may say it is also their best. In this classic film, Johnny plays Edward, an artificial man whose creator’s premature death left him with just scissors for hands. Edward is welcomed into the home of a suburban family and falls in love with the family’s teenage daughter (played by Winona Ryder). The movie has been described as Tim’s most personal work, a Gothic metaphor for his own upbringing. We just see it as an exceedingly well-directed film with a remarkable breakout performance by Johnny (his portrayal of Edward skyrocketed him into household name status). And to think that Tom Cruise, Tom Hanks and Robert Downey Jr. were at one time considered for the part. Thank goodness none of those guys panned out!

While it may not be their best-known film collaboration, it certainly earns its place on our list as one of the best. In the movie, Johnny plays Ed Wood, widely regarded as the worst director in film history. His movies, such as Plan 9 from Outer Space and Glen or Glenda, consistently make Worst Films Ever Made lists, and his eccentric personal life only added fuel to the fire. Johnny’s portrayal of Ed is both hilarious and heartbreaking, a performance that earned him huge accolades and a Golden Globe nomination. Tim was able to capture the mania of Ed’s life and career, but he managed to treat it with sensitivity rather than with judgment. He also chose to present the entire movie in black-and-white, which in itself is an effective homage to the filmmaking era of Ed Wood. If you haven’t seen this movie, watch it. But before you do that, watch some of Ed Wood’s films (if you can make it through them) to better appreciate Ed Wood.

The only thing better than watching Johnny Depp play a murderous barber whose victims get baked into delicious meat pies is watching him sing about it. For Sweeney Todd, Tim Burton took a serious risk by making one of the darkest, most beloved musicals ever into a movie. Johnny’s Sweeney Todd was just the right mixture of crazy and sympathetic, and he flexed some pretty impressive musical muscles as he murdered his way through the musical’s challengeing score. Tim Burton really caught the bleakness of Sweeney Todd‘s London, making the characters appear corpse-like and everything around look covered in heavy dust. It’s hard to nail a movie musical, especially one this complicated, but Tim’s vision and Johnny’s performance made this the very creepy and effective film it is.

What happens when quirky becomes the new normal?
The battle of the deja vu superheroes
Anna Faris is pregnant!