Brad Pitt is the new face of Chanel No. 5, one of the most popular women’s fragrances in the world. If he is able to hawk something so quintessentially feminine, what other lady products can we expect to see Brad selling us? 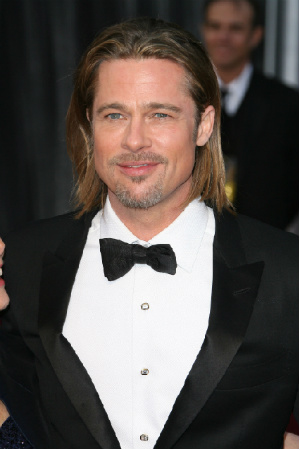 One thing we can say for Chanel: They sure seem to understand their customers. Rather than sign on a new beautiful, elegant woman to hawk their ladies’ perfume market dominator, Chanel No. 5, they have signed on a beautiful, elegant man. That man would be Brad Pitt, whose face is so pretty that it is as much the envy of women as it is of men. Rather than present buyers with yet another ad campaign that offers the fantasy of what kind of women they might be if they too wore Chanel No. 5 — a size zero, perhaps, and owning nothing but dramatic gowns and diamonds while living in Paris — they instead seem to be selling their customers on something even more important: the kind of man who wants a Chanel No. 5-wearing woman.

This marks the very first time Chanel is using a male spokesperson for its favoured fragrance. While many actresses have had the honour of being the face of Chanel No. 5 in the past — Nicole Kidman, Audrey Tautou, Keira Knightley — Brad Pitt’s involvement seems to have sparked an especially unpleasant reaction from the fashion world. Coco Rocha, who happens to share her first name with Chanel’s famous founder, tweeted, “no working model is happy for Brad Pitt and his new gig as the ‘face’ of Chanel No. 5.”

It is a bit strange for a man to be the face of one of the most definitively feminine products one can buy. We’ll be interested to see if this bold marketing strategy boosts sales of Chanel No. 5. If it does, and if Brad Pitt ends up being the best thing that ever happened to Chanel, would it mean the dawn of a new career path for Brad Pitt? Is Brad Pitt going to start selling us all our lady products?

How does Brad Pitt like his woman? Easy, breezy and beautiful, of course! Brad Pitt’s Cover Girl is someone who dares to let her true colours show. She’s not afraid of bold, smoky eyes with intense lashes, but she’s also the height of glamour with her sophisticated matte red lips. Even Brad Pitt turns a shade of rose when he sees his Cover Girl lighting up a room, wearing that effervescent CG blush. Best of all, Brad’s Cover Girl lets him borrow her makeup whenever he wants. And since CG is so affordable, his easy, breezy, beautiful woman won’t mind when he uses up the Continuous Colour Lipstick again (even though he keeps insisting he never touches it and it’s not even his shade).

Secret is strong enough for Brad Pitt, but made for Brad Pitt’s kind of woman. And just who is Brad Pitt’s kind of woman? She’s the president of a multinational company. She’s a semi-professional white water rafter. She’s a cow rancher from Montana. And she’s an adventurous lover. She’s the woman who uses Secret brand deoderant and antiperspirant so she never breaks a sweat — not even in the presence of Brad Pitt. She’s even strong enough to tell Brad he could use some Secret himself — when was the last time he showered?

When it’s that time of the month, Brad Pitt’s got his woman’s back: He knows Tampax is a woman’s most trusted defence against periods. So when she’s drowning her feelings in ice cream and throwing vases at his head, Brad Pitt can feel good about the fact that when he flees the house in terror, he can drop by the drugstore and buy a box of Tampax to help his woman get back to her life again. She’ll be running through meadows and wearing white bikinis again in no time.

Brad, we keep telling you, you are not the spokesman for Victoria’s Secret. Now drop the panties before we call the police.