Is Kanye West completely smitten with Kim Kardashian? The outlandish rapper may have marriage on his brain and lips after he reportedly rapped about the prospect of marrying the reality diva. 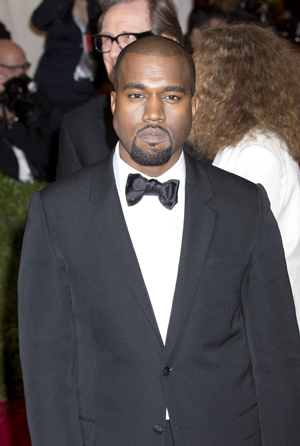 Kanye West is getting lyrical about the way he feels about his new girl.

The rapper, who has been publicly romancing reality queen Kim Kardashian, is getting serious about his relationship with her and is now even rapping about marrying her. According to an exclusive Us Weekly report, a source says Kanye appears on rapper Pusha T’s upcoming track, where he mentions the marriage prospect. He raps: “I saw you in the club in a white dress/Now I want to put you in a white dress.”

There is nothing more romantic than a man rapping about how much he wants to marry a girl. Right, ladies?

Although Kanye hasn’t confirmed this line was dedicated to Kim, another source says both celebrities are “having conversations about marriage.”

This is not the first time the M-word popped up for the new couple. Since they made their relationship public a month ago, another source told the entertainment magazine that they’re very serious and “are talking marriage,” even though Kim’s divorce from NBA player Kris Humphries has not yet been finalized. But Kim still wants to be by her new beau’s side and is even reportedly travelling with him on his summer tour.

“She wants to be with him as much as possible,” says a source. “They really know and love each other.”