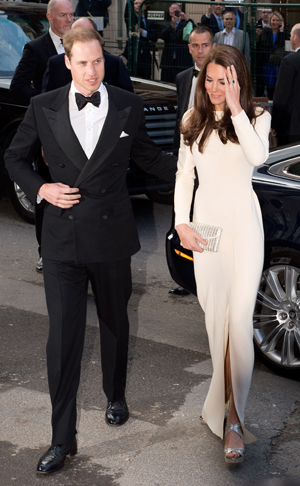 Prince William and Kate Middleton were out on the town yesterday, attending a private dinner held by the Thirty Club at Claridge’s Hotel in London.

The prince was to make a speech at the gathering and has reportedly accepted the elitist club’s membership invite.

“He’s been invited for about the last nine years but thought it right to accept the invitation this year, as he has this personal landmark coming up, and it is such a landmark year for the royal family in general,” a senior royal aide told U.K.’s Express.

Coincidentally (or not so much), Princess Diana had once addressed the secretive dining club back in the day as well.

While it is an important landmark on William’s resume, most of London was talking about Kate Middleton’s “risque” dress. The Roland Mouret gown with a thigh-high slit dropped some conservative jaws, considering that the royals traditionally dress like flamboyant nuns. But we think the duchess wore it well and was as elegant as ever.

Fun fact: The soon-to-be former first lady of France — Carla Bruni — once wore the same Mouret gown (but in blue), but hey, the French are crazy, anyway…

There ye have it, your daily royal feed. Godspeed!