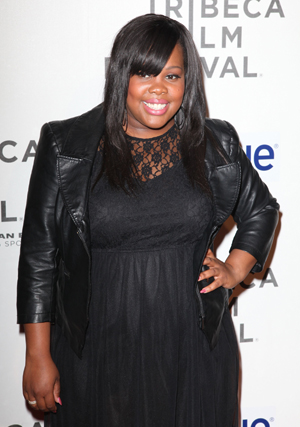 Well, this is nothing to be gleeful about…

Amber Riley — who plays Mercedes on Glee — fainted on the red carpet of TV Academy’s celebration of FOX’s popular show.

The star collapsed in the midst of an interview due to reported exhaustion. But is she OK?

Yes, she certainly is. The actress took to Twitter to calm the frenzy of worried fans.

“Hey guys, I’m okay :),” Riley tweeted. “I got a little dizzy from all the photog flashes! You’d think [I’d] be used to it by now, still a red carpet amateur I guess. Gonna get checked out but I feel fine. Thank you for all the concern and well wishes.”

The producers and cast of Glee were at the TV Academy of Arts and Sciences for a panel discussion, which was held in front of Emmy voters. Pressuuuure. Luckily Ms. Riley was able to participate.

That’s some cray-cray stuff right there. We hope this was a one-time deal for the talented star. Watch yee health, girly!