This one’s a doozy… Wiz Khalifa and friend were cited for misdemeanour and possession of the ganja over the weekend. Oy. 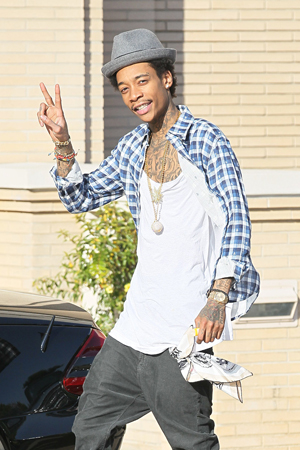 Someone got a little carried away with the ganja…

Wiz Khalifa received an unwelcome visit from the police on Saturday after his neighbours complained about a strong odour of marijuana wafting through the hallways of the Nashville hotel he was staying at.

The po-po on scene reported that Khalifa’s room was practically permeated with the stank of Mary Jane, but the rapper denied hoarding any drugs. Obviously the police officers were not convinced; you could cut the herb smoke with a chainsaw…

Eventually Khalifa and his smoking buddy, Lonnie Howard, fessed up to harbouring the marijuana within the foggy hotel quarters, and both were cited for misdemeanour and possession.

The pot enthusiasts are due to report to Davidson County Court before May 14 for their respective charges.

Not all nature lovers are treated the same. Plant a tree, don’t smoke the grass. Opinions?