That’s probably not a pleasant place to find yourself. Jack Black visited a maximum-security prison in Texas to speak to a convicted murderer for his new film role. 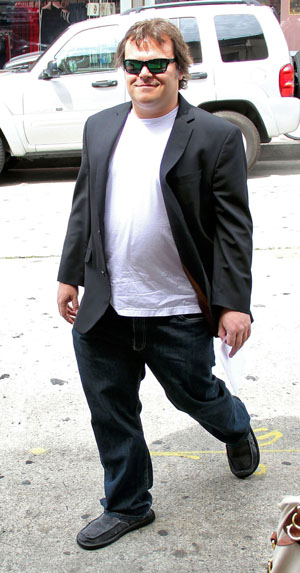 The things one does for art…

Jack Black recently found himself in a maximum-security prison… No, he was not arrested. The actor visited convicted murderer Bernie Tiede, whom he is playing in an upcoming dark comedy aptly named Bernie.

So what was it like for the comedian in the ol’ gaol?

“It was scary,” Black told E! News. “It was intimidating… Yeah, we’re safe because there are guards around, but you don’t feel safe. You feel like you can get killed any minute.”

The film, directed by Richard Linklater, is based on a true story about Bernie Tiede, a Texan mortician who murdered his 81-year-old companion, Marjorie Nugent, in 1996 and was sentenced to life imprisonment.

“I definitely feel like he served his time,” Black said. “He deserved punishment, to do hard time because it was murder — but not all murders are created equal.”

It will be interesting to see a rather gruesome story turned into a comedy. Black better step up his game for this one, yes?

Bam! There ye have it. Jack Black, murder, gaol, intriiiigue. Sounds like a promising film. What do you think?