April is pregnancy month, apparently. Megan Fox has a wee little bun in the oven, or in other words, she’s expecting her first child with Brian Austin Green. 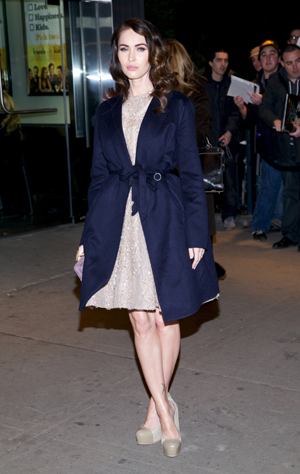 Jaw-dropping news, y’all. Hold on to your sanity.

Yep, the actress is expecting her first child with husband, Brian Austin Green (why yes, he is David Silver from 90210). The couple has been married since 2010.

“I want at least two, probably three kids,” the actress told Cosmopolitan in its April issue. “I’ve always been maternal.”

Now, we’re unsure how we feel about this; it’s a mix of joy and utter fear. Megan Fox, like Snooki, never struck us as the motherly type (it may have something to do with her hotness)… Yet both of them are pregnant. Whaddya know?

All we know is that it’s going to be one foxy baby… We’re allowed at least one pun.

But there ye have it. Congrats to the happy couple, and good luck to the rest of us. Godspeed!