Hilary Duff has lately been a target of some hatin’ on Twitter over her weight. But the actress wants the world to know she is getting back into an exercise regimen on her own terms. 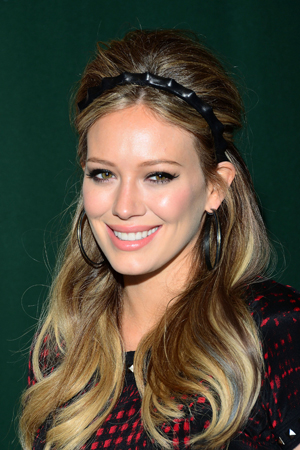 Apparently the people of Twitter nation. Hilary Duff stepped forth to dispel rumours that she’s obsessing over regaining her pre-pregnancy body.

The actress and newly branded mama gave birth to little baby Luca in March. Duff was spotted hitting the gym a week after, prompting some less-than-kind Twitter patrons to criticize her weight and exercise regimen.

“I read comments on my Twitter page about how I’m waddling into Pilates, and I go, ‘Wow, that’s a really mean thing to say. I just had a baby three weeks ago!'” the actress told Parade magazine.

“I’m not stressing about it. I’m working out because I honestly missed it during my pregnancy — getting in that good, hard workout. I need endorphins in my life to be a happy person. I want my body back, but I’m not freaked out or anything. Just working out and trying to eat a little bit healthier,” she revealed to Us magazine.

The woman just squeezed out a human from her lady bits, and she’s pint size herself! Duff can gain all the weight she wants and take her sweet time getting back in shape — she has honestly earned it.

What do y’all think? Haters are just gonna hate, or should Duff hit the gym pronto?