Pippa Middleton finally has someone on her side. Viscount Arthur de Soultrait issued an apology, stating that Pippa was not amused by the incident at all. 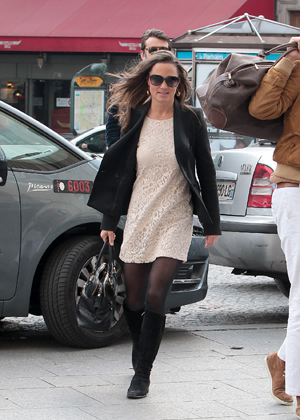 While the royal household is gathering its best scribes to pen an excellent apology and excuse for Pippa Middleton’s graceful mishap avec a man wielding a toy gun in Paris, the party host and witness, Viscount Arthur de Soultrait, has already issued an apology statement absolving Pips of any blame.

“Last Saturday I was in a car with Philippa Middleton, and we were being followed by paparazzi,” the Viscount said in a statement. “She had been subject to constant and dangerous harassment by paparazzi throughout her time in Paris. The car was being driven by a friend of mine, whom Pippa had only met a few hours before. As a joke, my friend brandished a toy pistol in their direction.”

Of course, the photos documenting the incident hit the web pronto and have since become subject to investigation and serious public scrutiny.

“Obviously Philippa had no idea that he was going to do that and told him to stop immediately,” de Soultrait continued. “She did not find it funny.”

The photos in question depict Pippa smirking — or rather, smiling — whilst her friend points a fake gun at the paparazzi, so it’s hard to believe Middleton Jr. was not amused.

The royal in-law was in Paris to attend de Soultrait’s birthday party, but instead became a hot topic of morality — not quite as fun.