Serious business right here. Pippa Middleton is under investigation after photos emerged of her accompanied by three male companions, one of whom was waving a gun in the air and even pointed it at a photographer. 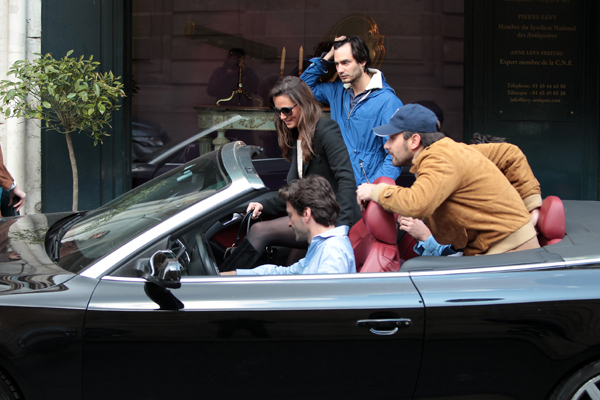 Uh-oh, Pippa might be royally screwed (pardon our French) in this one…

Pippa Middleton is subject to investigation after being photographed riding around Paris avec three male friends in an open convertible while one wielded a firearm.

The photos depict Pippa in the front seat of the car with one of the men holding a gun openly in public and even pointing it at the photographer, who still managed to snap a photo. The sister-in-law to Prince William was in Paris for a friend’s birthday (who reportedly was also in the car).

Paris police stated that if evidence is found, Pippa will be prosecuted.

“Anybody involved in the illegal use of a handgun in public is liable to arrest and interrogation,” a source told the U.K. Sun newspaper.

French laws dictate that anyone wielding a gun in public can face up to seven years in prison. If the firearm in question turns out to be a toy or a replica, the offenders can still spend up to two years in jail.

There has been no word from les Middletons or the royal camp.

On a side note, for a country that invented the guillotine and propped up heads on spikes, France has very tight laws on violence and possession of weaponry. Other countries should follow suit.

This is quite the pickle for Middleton Jr., though it is unlikely she will face jail time. But perhaps wiser choices will be made in the future… Like, don’t hang out with people who wave guns in the air.