Lindsay Lohan’s probation has just finished, and she has already been accused of punching a woman in a club. And over the weekend, she attended Coachella and claims to have been sober. Yay or nay? 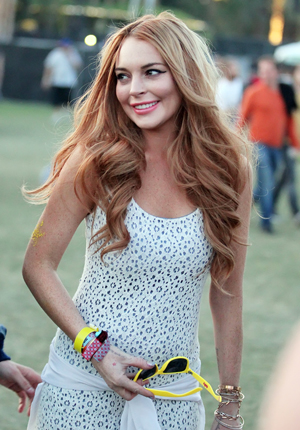 So, you know how you tell a child not to touch the stovetop and he or she does it anyway? Similar situation here…

Lindsay Lohan’s judge recently advised the actress to get to work and keep her freckled nose out of clubs. So what does LiLo do? Obviously she goes to the Coachella Festival.

Coachella — the musical, hipster, drunken fiesta on a field… That’s probably not what Judge Stephanie Sautner was advising.

But Lin-Lins dressed to the nines (in heels and all), hit the grassland for some tunes and, according to TMZ, claimed that technically Coachella is not a club, so it’s not off limits.

Lohan also stated that she’s been attending Coachella for the past four or five years (about the span of her criminal past — not a good argument). She came for the music and didn’t have a single drop of alcohol.

Should we believe her?

Well, attending Coachella just for the music is like going to a strip club just for the food; it’s possible, but not probable. So judge for yourself.