Is this a promise of things to come? Seal was photographed giving Delta Goodrem a friendly kissy-kiss on the cheek on the red carpet in Melbourne. 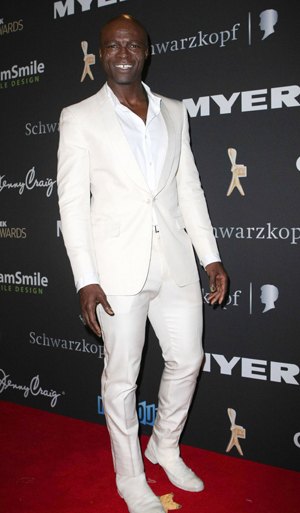 Ooh, can we be witnessing the blooming of a romance?

Perhaps. While we are still recovering from last week’s news that Heidi Klum and Seal have filed for divorce, the singer may already be in the rebound lane.

Seal, wearing a white suit and golden nail polish, was photographed planting a smooch on Delta Goodrem’s beautiful little cheek at the 2012 Logie Awards in Melbourne.

You may ask, who dat?

Goodrem is a 27-year-old Aussie singer and also Nick Jonas’ ex — they broke up recently.

So two newly single singers shared a friendly kiss on the red carpet… Dating alert or friendly courtesy? No idea.

There is a 20-year age gap between them, not to mention Seal is not yet divorced and has four children… But if you look past all of that, anything can happen.