Entertainment One and Marilyn Monroe’s estate have announced that they will be producing a new reality show called Finding Marilyn, which will see 12 girls competing to be the next American icon. We’re not so sure about this. 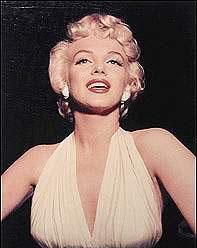 You’ve seen every one of her movies. You saw My Week with Marilyn in theatres and watch it every night on demand. Now you’re a diehard Smash fan, which pays tribute to Marilyn every week. But it’s still not enough. Your apetite for the timeless star just can’t be satisfied. You need more.

Well, now there’s something new that will help feed your insatiable hunger for Marilyn Monroe. May we present Finding Marilyn, the latest effort from the big-time production company Entertainment One (eOne), in conjunction with the estate of Marilyn Monroe. Finding Marilyn is a reality show in which 12 lucky girls will compete to be the next Hollywood icon. The winner of Finding Marilyn, according to Nick Woodhouse, CMO of Marilyn’s estate, will have the opportunity to “emulate Marilyn Monroe’s iconic journey to stardom.”

Hang on a second. Is the show itself the journey to stardom? Or is the prize the journey to stardom? Because — correct us if we’re wrong — isn’t a reality show competition already a kind of rags-to-riches story in itself? Why would the winner need to go through all of that again if she has already earned her fame from the show? To be honest, we’re not entirely sure what they’re going for with this show. And frankly, we’re a little skeptical.

It’s not that we have a problem with the announcement of yet another reality show competition; it’s just that we’re a little uncomfortable about the fact that it is designed to manufacture the next Marilyn Monroe. As has been made abundantly clear to us during this recent wave of Marilyn mania, Marilyn suffered a deep sadness throughout her years of celebrity. Yes, she was an adored star and the epitome of sexuality, but beneath that facade of beauty was a substance abuser desperately seeking happiness. She is as much the face of glamorous Hollywood sex appeal as she is of the darkness that fame can bring.

Apparently the producers of Finding Marilyn believe that Marilyn Monroe’s unhappiness is an issue separate from her iconic fame and sex appeal; at least, that’s what we hope is the case, since they appear to have no qualms about escorting impressionable, fame-hungry young girls down the very same rocky road as Marilyn. Otherwise, we seriously have to question the integrity of these producers — and have a chat with anyone who is hoping to compete.

We’re also a little bristled at what the show’s entire concept appears to be. Rather than present a competition based largely on exceptional ability, like American Idol or America’s Got Talent does, Finding Marilyn, based on the information we have been given, seems like it will be bypassing the talent quotient altogether and focusing strictly on the sex appeal. Let’s not forget that, while she was very sexy, Marilyn was also an actress. Will the show devote any time to acting skills? Or will we be watching 12 beautiful girls compete over who can be sexiest with her dress being blown up by a heating vent?

We can see how the creators of Finding Marilyn likely intended no disrespect toward, but a reverence of, Marilyn Monroe, and the involvement of her estate is somewhat reassuring. But until we see exactly what it is they’re planning to do with this thing, we’re going to reserve judgment. The last thing we want to see is another casualty of fame, especially one as tragic as Marilyn Monroe’s.

Controversial celebrity parenting 101
Chris Noth marries girlfriend
Is it possible to be a completely original musician?