She is the writer behind the famous Harry Potter books. But after completing the series, J.K. Rowling is ready to move on to the world of adult fiction with her newest, post-Potter novel. 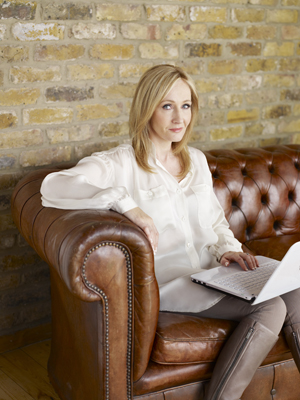 After finishing the last book of the Harry Potter series in 2007, the writer is ready to move on to the world of adult fiction. Her newest endeavour? A 408-page novel titled The Casual Vacancy. Sounds interesting enough, no?

So what’s it about, and more important, is there magic?

Rowling’s publisher — Little, Brown Book Group — finally offered us a little abridgement of (what is bound to be) the hottest book of the year.

“When Barry Fairweather dies unexpectedly in his early forties, the little town of Pagford is left in shock. Pagford is, seemingly, an English idyll, with a cobbled market square and an ancient abbey, but what lies behind the pretty facade is a town at war. Rich at war with poor, teenagers at war with their parents, wives at war with their husbands, teachers at war with their pupils…Pagford is not what it first seems. And the empty seat left by Barry on the parish council soon becomes the catalyst for the biggest war the town has yet seen.”

Of course, an idyllic little cobblestone-lined English town is familiar enough to Rowling’s fans, but as the expression goes, if it’s not broke, don’t fix it. What remains to be determined is whether the author can make the transition from writing children’s wizard-boy books to tackling the world of adult fiction.

Only time will tell. Rowling’s resume is impressive as it is. As the conjurer of the popular Harry Potter series — which sold over 450 millions copies worldwide in 74 languages as well as spawned a successful movie franchise — and as Britain’s 15th wealthiest woman (with a fortune of £530 million), she is a literary figure to be reckoned with.

The Casual Vacancy will be released in English on Sept. 27, 2012, in hardback, e-book, audio download and CD formats.

What do y’all think? J.K. Rowling as an adult author, yay or nay? Will you give her newest novel a read?