Whether or not you agree, Nicki Minaj does not think she is similar to Lady Gaga — at all. Although, the comparison between the two has been persisting for a while now. 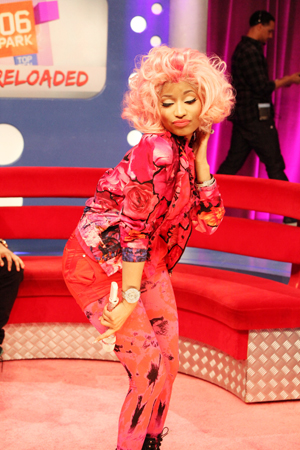 OK, we all thought it… What’s the deal with Nicki Minaj and Lady Gaga? Their similarities are uncanny, no?

Well, Nicki Minaj could not disagree more. The rapper, who has a love affair with outlandish costumes and controversial performances (like at the Grammys), rejects any parallels between herself and Lady Gaga. Although to us, they’re twinsies.

“Offends me, no. Irks me, yes,” Minaj told ABC. “We are in completely different lanes.

“I’m a rapper. I’m from southside Jamaica, Queens. I could say some really crazy lyrics right now, but I won’t,” the performer continued. “Gaga’s a fantastic artist, you know, she paved her way.

“She’s opened her own lane. But I think that I have my own lane, and we never cross. Ever. So, you know, I really don’t get the comparison anymore. Our music doesn’t sound the same. Our stage presence is not the same. I just can’t see the similarities.”

So, they are both from New York, like cray-cray fashion, are controversial, are of similar age, put on grandiose shows and have performance personas… Yes, two worlds apart.

Either way, both are trailblazers; that is something hopefully both can agree on. What do you think?