Interesting… Jennifer Aniston and Justin Theroux are pretty much the Hollywood “it” couple. Well, this power-couple has joined forces with another star couple for a double date. But with whom? 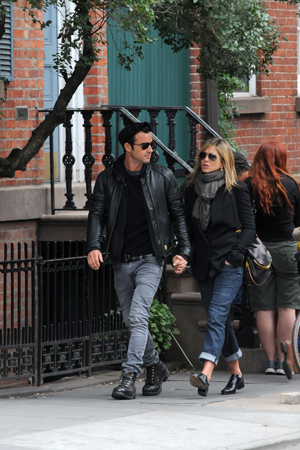 Unexpected outing, but it almost reeks of adorable! Jennifer Aniston and her boo, Justin Theroux, had a double date with… Tom Hanks and his wife, Rita Wilson!

The friendly four went out in L.A. for sushi at Katsuya in Brentwood and reportedly spent a respectable two hours together.

“They all appeared to be really enjoying each other’s company and sat at a private booth… It was a fun sake-and-sushi double date between two super-power couples,” a source told People magazine.

Aw, the conversations these guys must have had… About being awesome, taking over the world, million-dollar shoelaces, tiny dogs and other things celebrities surely discuss.

It must be harder and harder to find a double date in Hollywood since the pool of actors and actresses is getting younger and younger. Imagine, Jen An and beau on a double date with J. Biebs and Selena Gomez… Intellectual discussions galore!

But there ye have it. Godspeed!