It’s not quite as epic as it sounds, but nonetheless… Boy George suffered a black eye when he was assaulted in a nightclub in the U.K. The best part is how it happened. 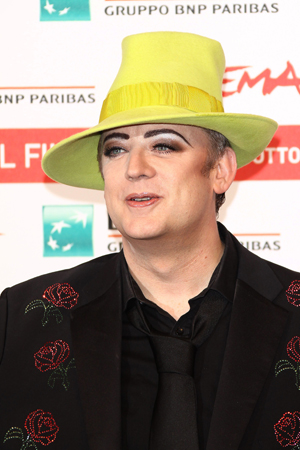 Oh man, the jokes to come out of this…

Apparently when Boy George sang “Do You Really Want to Hurt Me?” it may have actually struck a chord with somebody, and they really did want to hurt him.

The former Culture Club singer walked away from the Amadeus nightclub in North Yorkshire this past Saturday with a black eye. How in the world did that happen?

“George was leaving the club when… a drunken and aggressive woman lunged for his hat, and in doing so, hit him in the eye,” stated the spokesperson for the singer.

Bah! Not really the scuffle everyone was hoping it was. You know, one of those “defend your honour” type of affairs in which Boy George would heroically fight to protect some principle of his.

The star also kindly shared a photo of his battle wound via Twitter, but has since removed it, leaving only the message, “Someone pulled off my hat and in the struggle to get it back I got poked in the eye!”

In the name of style! Protect that hat, for the love of all that is holy! What do ya’ll think? Share.

Adam Lambert: Buzzed and looking fab!
Gavin Rossdale had a fling with a man!
It’s official! Adam Lambert to sing with Queen

51 mins ago
by Ellen Niz