Princes can be superheroes too… Case in point: Prince Harry sped to the assistance of a fallen opponent at a polo match. The prince’s knowledge of first aid saved the man’s life. 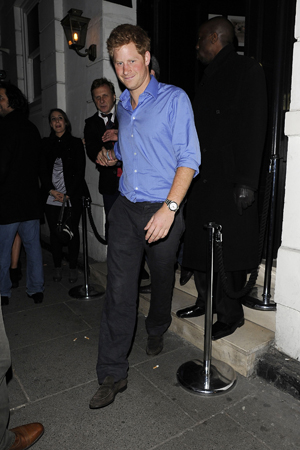 Our hero! Mr. Perfect — or Prince Harry, as he humbly calls himself — rushed to the aid of his polo opponent when the latter fell off his horse in a collision with two other players at a charity match in Brazil.

The 27-year-old royal leaped off his horse to help Bash Kazi — chief executive of defence technology firm KIG and fellow polo player — who fell off his good steed and lay unconscious on the turf. The prince, trained in first aid during military service, rolled Kazi over to his side in recovery position.

We imagine it was a slow-motion moment, set to the sound of a choir, with Harry’s flaming red hair fluttering in the breeze as he swiftly dismounted his horse to save a man’s life… Too much? Anyway…

Kazi sustained a minor concussion but came around to consciousness and was even able to walk off the field unassisted. Harry’s quick response saved his opponent’s life, according to medical specialists.

“Given the prince is a veteran of Afghanistan and an active duty officer in the British Army, he’s presumably had good training in basic trauma care, so it’s not surprising he knew what to do,” stated Joe Mulligan, head of first aid at British Red Cross.

“But his actions do underline a very serious point: when accidents happen, particularly on a sports field, someone needs to have the confidence and skills to step in immediately and help. Simply laying someone on their side so they can breathe properly is good first aid and could save that person’s life.”

So now Prince Harry can add “rescuer” to his resume. As if we needed any more reassurance that he is nearly flawless.

But there ye go.