Cat fight! Not really… Katie Price is not a happy camper after reading Victoria Beckham’s interview with Harper’s Bazaar, where the former Spice Girl stated that her size 6 frame represents the “average” British woman. 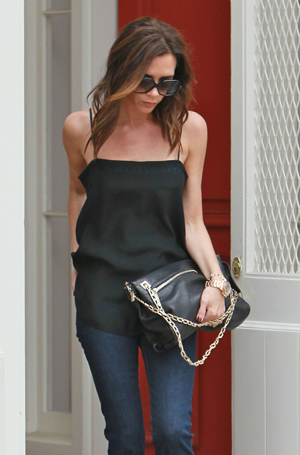 Yeah, she may have overstepped a bit with this one… Victoria Beckham was criticized by Katie Price for stating in an interview with the British Harper’s Bazaar that she presents the “general public” with her size 6 figure.

In the interview with the magazine, the former Spice Girl discussed her fashion collection and why she personally models for it.

“We always joke that we have this fabulously gorgeous 17-year-old model who is six-foot-whatever, and then I say ‘OK, I’m going to put it on. I stand for the general public here.’”

Obviously Beckham, with her slight figure, does not evoke the standard British or North American woman, and Katie Price was quick to notice that folly. In her own column in The Sun, Price slammed the Bazaar interview, stating that, “all this Californian sunshine is sending Posh senile because she is a size 6.

“And if she had read the papers this week, she would know that the general public likes eating pastries and the average British woman is a size 16. They can’t afford Posh’s £1,000 dresses, let alone fit into them.”

Ouchies. But it is true. The average British woman is a size 16, which equates to an average Canadian woman as well. So, in terms of marketing, Posh Spice may not be the best model to appeal to this “general public.” That said, the majority of British and Canadian women are overweight, so flaunting the “size 16” fact is not a bragging right either.

Bottom line, Posh should release an exercise video with her hubby David Beckham and make bigger dresses. That is all.