Lindsay Lohan appeared in court to end her lengthy probation. We’ve had a good run, but it’s time for wild Lindsay to blossom into an unstoppable force of talent. We kind of miss her… 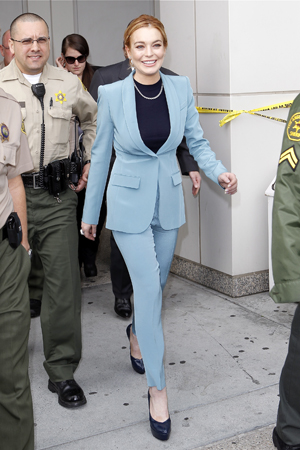 It seemed like forever, but believe or not, Lindsay Lohan‘s probation is officially over. Although we are accustomed to the “criminal” Lindsay who drives while intoxicated and pockets necklaces, it’s time to say goodbye to her and usher in a new era of mature Lindsay. Dun dun duuun.

Lohan, sporting a blue suit and almost natural hair, was back in court to end her probation for DUI and necklace thieving.

“Ms. Lohan has done everything she was ordered to do… probation terminates today. Now,” Judge Stephanie Sautner stated. And we all nod in concurrence, yes?

“The only terms left for you on that case are to obey all laws. It’s not that hard. I know it’s kind of hard when people are following you around all the time, but that’s the life you chose,” the judge continued. “I’m not going to give you a lecture. Live your life in a more mature way, stop the nightclubbing and focus on your work, OK?”

To which Lohan humbly replied, “I just want to say thank you, Your Honor, for being fair, and it’s really opened a lot of doors for me, so I really appreciate it.”

So, what does this mean? Can we expect to see Lindsay out and about with the sun still out? Or coming out of clubs with a bottle of water? Or — in the more risque scenarios — riding a bicycle instead of driving a car? Sounds like witchcraft…

Lohan technically is now on informal probation, which means she does not need to report to court, and this probation ends on May 20, 2014.

And E! News reports that, to celebrate the end of her probation, Lin-Lins is planning to have a little party in the penthouse suite of the Chateau Marmont with 30–40 close friends. Nothing says “I’m done partying” like a big ol’ party.

Oh, Linny. We love you so. There ye have it.