A woman must have confused Kim Kardashian for a delicious pastry when she tossed a flour-bomb at her… And now she may have to pay for that mistake, because Kimmy is considering pressing charges. 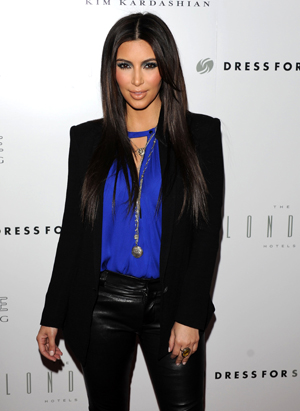 Well, this was all over the news. Kim Kardashian was hit with a “flour bomb” at the launch for her perfume True Reflection, which was also benefiting Dress for Success – an organization providing guidance and business attire to disadvantaged women in order to help them succeed in the work force.

According to reports, this flour pelting phantom woman came out of nowhere and even caught the photogs unawares when she catapulted a vessel full of powder at the reality TV star.

Kardashian was a good sport throughout the ordeal and after a quick magic, clean-up, reappeared at the event. But she is considering pressing charges against the unidentified party-pooper, who was later escorted from the premises, in case you were wondering.

“I said earlier no I wasn’t [going to file a complaint],” the star told E! News. “I am just going to think about it, because I don’t want someone to think they can really get away with that. So we are going to handle that.”

What about the nasty perp?

“I just think it is such a shame that someone like that…would ruin an event, or attempt to ruin an event, that was based around, not only my fragrance, but this organization, Dress For Success.

“I mean that’s what the event was about. These women flew in from all over the country to be a part of this event, that are underprivileged women, that really got the shine taken away from them a little bit. That’s why I am calling in now. I feel bad that it was kind of derailed from that.”

Spoken like a true soldier. It is a wonder how the security allowed the flour-lady to get into the press section unnoticed; you can’t bat your lashes out of this one…

But the show must go on and Kimmy Kim-Kim did a great job promoting the charity organisation. We always appreciate those philanthropic efforts.