This can only happen in Hollywood… After Lindsay Lohan filed a lawsuit against Pitbull for tainting her “good” image with his lyrics; the rapper retaliated by filing a suit accusing the actress’ lawyer of plagiarism. 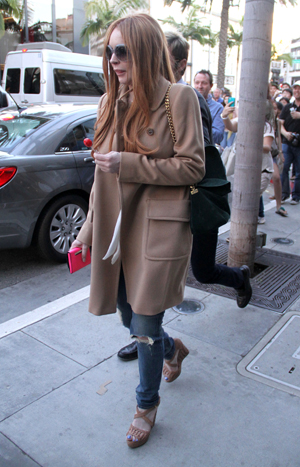 Who needs comedians if you have Lindsay Lohan and Pitbull?

In 2011, Lohan filed a lawsuit against Pitbull – or Armando Christian Perez – for “exploiting” her name in the his song, “Give Me Everything” by rapping, “I got it locked up like Lindsay Lohan.” The worst part of it all… He didn’t pay her. Dun, dun, dun!

Does using Lohan’s name really benefit anyone, anymore? It’s not exactly associated with anything remotely legal…

Nonetheless, now, Pitbull with the help of his attorney – Marcos Daniel Jimenez – is filing a lawsuit back at the actress accusing her lawyer, Stephanie Ovadia, of plagiarism! Yes kids, apparently this issue resonates even after graduating grade school.

Ovadia, stands accused of consulting online sources. On top of that, her legal briefs, “[reveal] a lack of independent research,” and, “[consist] of plagiarized excerpts of articles found on various websites without explaining their relevance to the facts and issues in this case.”

To make it even worse, Jimenez provided examples side-by-side of Ovadia’s notes in contrast with extracts from various online articles, she is accused of reaping the legal fruit from. Two words: You’re fired!

Maybe her legal licence is hand-drawn with crayons. Lohan should have ran her lawyer through an obstacle course to make sure she’s the real deal. Now, the can is open… Worms everywhere.

But there ye go kids, check your facts. Cite your sources. Godspeed!