A quaint historical Montreal rotisserie, which famously partnered up with Gordon Ramsay, is now smelling a fresh, piping-hot defamation suit for giving the chef the boot. 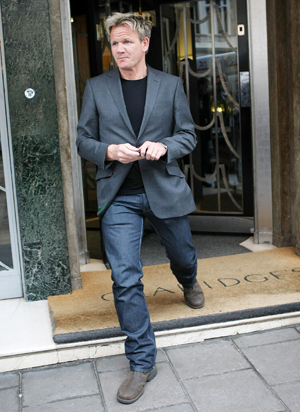 Once upon a time, Gordon Ramsay made a Montréal restaurant very happy by gracing them with his omnipotent presence and agreeing to become a partner in the managing of the establishment.

Alas, the joy was short-lived. Not long after the staff of Laurier Gordon Ramsay finished emblazoning the letters of the famous chef’s name, the rotisserie owner, Danny Levy, decided to part ways with Ramsay because he did not show up for work.

Now the chef is huffing and puffing; he has called-in his favourite lawyers to serve a lawsuit for almost $2.7 million for alleged defamation and lost licence fees.

The little restaurant now goes by Laurier 1936, which has a bit more authenticity to it.

Agreeing to be a partner in a restaurant and not showing up since its re-opening is one thing; but claiming defamation because the restaurant owner did not slither behind Ramsay and beg him to participate, is a whole new species of snobbery. The lawsuit can potentially financially destroy the historical rotisserie and its value to the chef appears to be a simple matter of principle.