The girls learn a tough lesson in episode three of cycle 18. Criticisms run rampant and the contestants learn to either take them and soldier on or fight them and face the consequences. 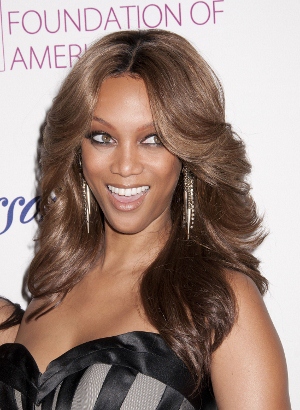 The episode starts off with a bang when the Brits decide to play a prank on the Americans. Seymone is not at all pleased to be woken at 2:30 in the morning by wet paper balls and boy does she show it. The Brits chalk her tantrum up to competition nerves and let it roll off their shoulders. But the real drama doesn’t lie between the contestants tonight.

In an inspiring tutorial, Tyra gives the girls capes and superhero nicknames based on their personalities and strengths. She also encourages them to learn more about marketing themselves as professionals.

But Tyra’s upbeat tutorial is soon followed by Kelly Cutrone’s no-nonsense approach to learning the ropes. The two teams of girls have to create their very own ad campaigns for Very.com in under 24 hours. They have to do everything from picking out the props and wardrobe, to posing for the photographer, to selecting the final photos for panel.

Azmarie is made the leader of the Americans and she responds very well to Kelly’s criticisms. Annalise, on the other hand, struggles as the leader of the Brits. But the real drama starts when Kelly Cutrone tells Louise to watch her energy on set. The two women get caught in a bit of a stand-off that ends in Louise pulling off some great photos before bursting into tears.

Some much needed lightness is brought to the show in the form of Cat Deeley as the guest judge. She showers the girls with gentle lessons and honest praise as only she can do. Unfortunately, even her cheerful energy can’t wash over the awkward tension that is about to break loose.

During the shoot Louise threatened that “if I’m in the bottom two I will walk.” Unfortunately she doesn’t manage to make it to that point as she breaks down when once more confronted by Kelly and storms out in tears. There’s no recovering from that kind of outburst and Louise packs her bags for the long flight back to England. The remaining girls are rewarded for their ability to take critiques by not being sent home.