Hélène Campbell is on a waiting list for a transplant and she is still taking the time to help others in the same situation. Ellen DeGeneres sent the young campaigner to The Hunger Games premiere as a treat for her good work. 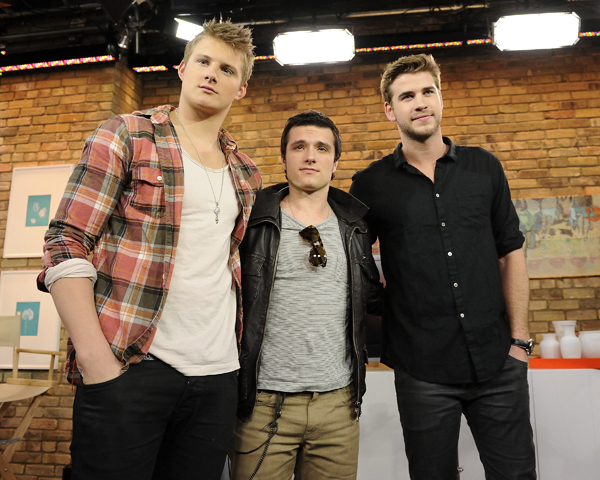 Ottawa woman, Hélène Campbell, was a special guest at The Hunger Games Toronto premiere, also attended by Josh Hutcherson and Liam Hemsworth. Campbell is awaiting a double lung transplant and appeared on the Ellen DeGeneres show via Skype in appreciation of her effort to boost organ donation. Her #beanorgandonor Twitter account is spreading the word for her cause and has even received support from Justin Bieber.

Last October, Campbell was diagnosed with idiopathic pulmonary fibrosis – a chronic lung disease branded by the excessive development of fibrous connective tissue in the lungs’ framework – and has since moved to Toronto after being placed on the transplant list.

Campbell attended the premiere with her father and brother, David, who actually introduced her to the Suzanne Collins books.

“I met Liam and Josh, who play Peeta and Gale,” Campbell said. “I got pictures with them and I got signatures.”

Campbell had to skip out on the red carpet during “rush hour” of all the madness; it was too crowded for her to get through in her wheelchair. But, what did the guest of honour think of the film itself?

“It was really well done, I can’t wait to see it again,” she stated. “It met my expectations in some places and exceeded it in others.”

Excellent, so no disappointments. That’s what we want to hear.

Campbell has taken on the role of a donor activist, being one of the 1,500 Ontarians awaiting a transplant. Ontario’s current donor registration sits at 21 per cent, while it has risen from previous 19 per cent; it is still the lowest registration rate of any jurisdiction that performs transplants. To compare, in U.S. the rate is at 35 per cent.

But with the aid of Campbell’s campaign, the Ontario registry at beadonor.ca has risen from 50 a day, to a steady 180. Which is quite an accomplishment.

This young lady received a well-deserved treat for eyes and we hope she continues her good work.