Let’s get physical! In a sporty way, that is. Kate Middleton visited the Olympic Park and played a game of hockey with the women’s team. The question on everyone’s mind: Did she wear her heels? 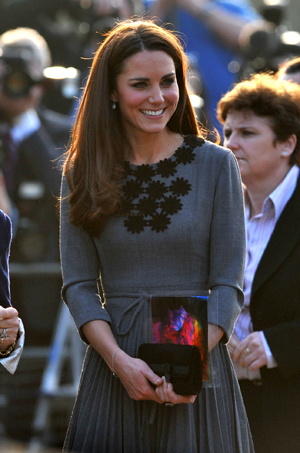 Man, oh man. While Prince Harry is partying it up in Brazil and Prince William is deployed in the Falklands, Duchess Catherine of Cambridge, a.k.a. Kate Middleton, is keeping up appearances and bravely playing a game of hockey with Great Britain’s Olympic women’s team.

Kate Middleton visited the British women’s hockey team yesterday at the Riverside Arena, in attempts to hype the Olympics in the U.K. The Duchess used to play the game when she was younger, reportedly even becoming the captain of her school’s team.

“I was really looking forward to coming here, but now I am here and have discovered I have to play,” she stated. “I am not feeling confident….The last time I played was 2005, maybe. It feels like I haven’t held a stick for 10 years. This is going to be so embarrassing. “

Nonetheless, Kate traded in her heels for a pair of sweatpants and running shoes and hit the arena. And although the Duchess missed the first three of her goal attempts, she did eventually score and this triumph was met with enthusiastic applause from the onlookers.

Well, that is quite the feat for a Royal. Running around, looking like an average person and even breaking a sweat? That’s just scandalous. She almost seems human.…

Whether or not it helped promote the Olympics is debatable, but it’s all in good fun anyway.