There were no chase scenes. Russell Brand simply turned himself in, after a warrant for his apprehension was released. So, now the juicy details.… 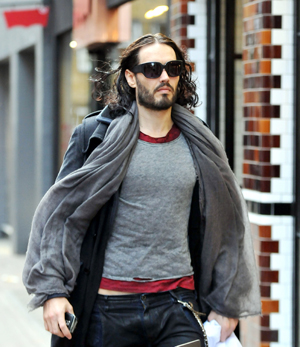 Orange jumpsuits are not flattering on anyone… and luckily, Russell Brand was not in jail long enough to find that out firsthand.

After a warrant for Brand’s arrest was issued yesterday by New Orleans authorities, the actor/comedian turned himself in. He was charged with one count of simple criminal damage to property and released shortly after on a $5,000 bond. So, he’s free as a baby swallow.

The warrant was issued after Brand went cray-cray and snatched an iPhone from a photographer’s hand to send it soaring through an office-building window. Brand stated that he had full intentions of funding the repairs of the aforementioned window, and according to E! News, it has indeed been repaired.

Now, what to do about the traumatized office employees, who are haunted by memories of an airborne cell phone? But more importantly, our bigger concern is how somebody who always looks like he is fresh out of yoga class turned into a berserk-maniacal-violent-phone-tosser quicker than Mel Gibson. Cool those engines, and shift into Sun Salutation.…

Keep calm and carry on.