Antonio Banderas was taught a valuable travelling lesson by some kind crooks at an airport in Budapest, when his wallet was thieved while the actor was distracted. 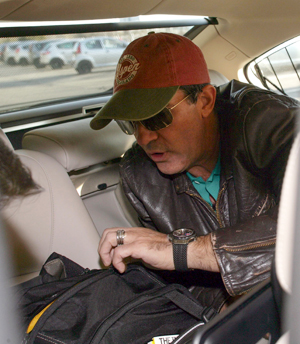 ¡Hola, señorrr! Did you lose something, perchance?

Antonio Banderas — commonly known as a stunning, divinely-wrought human specimen, or un hombre guapo, in Spanish — ran into a bit of trouble when he arrived at Budapest’s Franz Liszt International Airport. As the actor was rushing from the flight gate to his car, an army of fangirls mobbed him for autographs and possibly a lock of hair; and when Banderas finally escaped the throng of screaming ladies, he realized that his wallet had been stolen.

The authorities were contacted but neither procured the wallet nor arrested any suspects. But the police believe that Banderas was targeted aforehand, and the perpetrators waited for the opportune moment — when the actor was distracted by the group of fans.

A very unfortunate incident, indeed. But one cannot help but wonder… How much cash did Banderas carry on him? Do celebrities even keep their coinage or toss it as petty money? Does Banderas have an awful driver’s licence picture? More importantly, is he capable of having an awful picture?

Maybe Banderas should have taken a page out of tourist clichés and had his wallet strapped to his chest or in his shoes… There is a reason why tourists do it.