Yay! The legendary actor Dick Van Dyke married makeup artist Arlene Silver in a private ceremony. According to reports, he’s happier than ever! 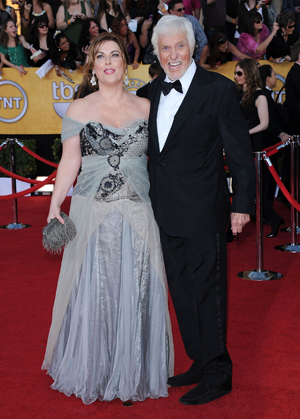 Well, they do say age is but a number, and Dick Van Dyke stands true to that statement.

The 86-year-old actor recently tied the knot with the 40-year-old makeup artist Arlene Silver in a quaint Leap Day ceremony at a Malibu chapel close to Van Dyke’s home. Silver’s family and only the closest of Van Dyke’s friends were in attendance.

According to Van Dyke’s publicist, Bob Palmer, the couple met at the Screen Actors Guild Awards five years ago and he has never seen the actor happier. Van Dyke’s partner of 30 years, Michelle Triola Marvin, died, aged 76, in October 2009.

Well, what can you say? He did well. It’s a great feat for a man his age to get married; but he managed to also snatch himself a beauty half his age. Van Dyke has always been a charmer, so it’s not surprising!

Oh, the stories this man could tell.… Well done, ol’ chap! Our hats are off to you; congrats to the happy couple!