We’ve all laughed and cried alongside Prince Harry, as he pioneered the Queen’s Diamond Jubilee celebration tour — and was excellent at it, by the way! Alas, his trip came to an end in Brazil. Let’s see what he was up to… 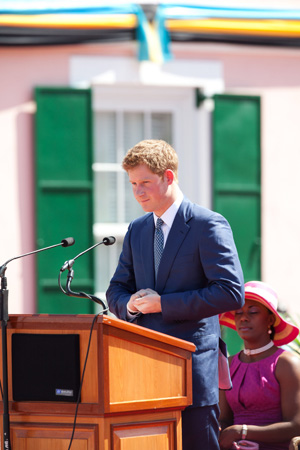 Life has been so uneventful and joyless without Prince Harry news. But fret not, this is sure to reawaken your will to live and be a balsam to those tired eyes….

Prince Harry has been keeping busy, galloping through the Caribbean on a mission to honour Queen Elizabeth’s Diamond Jubilee. He has partied it up in the Bahamas, Belize and Jamaica; and this past weekend, this boy took his royal self to Brazil. And man, oh, man, the fun he’s had… certainly makes us jealous, sitting up here in sub-zero temperatures.

He kicked off the tour in a true royal fashion — by completing a Sport Relief mile in Rio de Janeiro. And, of course, he had to brighten the seriousness of his deed by sporting a cut-out mask of Prince William’s face during the charity race. He ain’t dubbed “the fun-loving royal” for nuttin’.

“Everything about Rio makes you want to dance,” Harry stated, quite innocently. “I’m just so thankful that my brother isn’t here because he might actually do it — and that would not be cool.”

There it is, it’s all fun and games.… What if Prince William’s confidence in his dancing skills just plummeted? What if he never dances again? Who wants to live in a world where horrible, disorderly rhythmic movements are forbidden or discouraged?!

But, moving on; the Prince also participated in a few games of volleyball, cricket and rugby, which he promised to teach Brazilians to play only on one condition: “Please, please — if we show you how to play rugby — don’t do what you’ve done with football, and leave us wishing we hadn’t.”

Harry also played at a charitable polo game, which his team won 6-3, no big deal. And he received a smooch from Brazilian swimwear model Fernanda Motta — not too shabby, sir!

To close this whirlwind trip of wondrous, royal, good-lookin’ goodness and celebration — Harry, take it away:

“I tell you what, it’s been an emotional trip. I’m absolutely exhausted, but the warmth of the reception that we’ve received from every single country that we’ve been to has been amazing.

“I personally had no idea how much warmth there was towards the Queen — to me that’s been very humbling, and I was actually quite choked up seeing the way that they’re celebrating her 60 years.”