Oh, for the love of all that is holy… somebody stop the madness! Apparently, the adult video industry sees great potential for Hulk Hogan’s secretly filmed sex-tape and is willing to cut him a slice of that pie…. 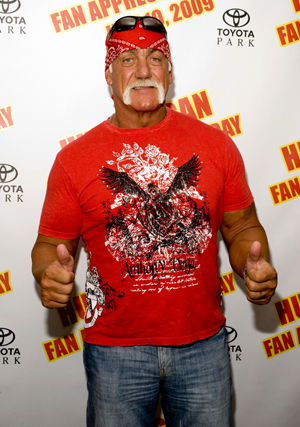 After possibly suffering brain hemorrhage and severe mental trauma due to the news of an existing Hulk Hogan sex-tape, we are flabbergasted once more with the emerging information that the tape in question is promising to become a bestseller!

Oh, yes. Vivid Entertainment assures Hogan that his tape has the potential to make it big in the adult video industry. How sweet. This is the same company that released 1 Night in Paris — an adult film that psychiatrists are still working to eradicate from our collective conscious memory.

“We understand that you believe this tape was filmed without your permission,” read a letter to Hogan from the CEO of Vivid Entertainment. “We would still like to discuss the opportunity to work together as we feel this would be one of the best-selling celebrity sex tapes of all time.”

The tape is indeed claimed to have been made without the ex-wrestler’s consent and luckily — for the celebrity morality scale, which is already low — Hogan declined the offer.

Hogan is still working to reclaim the footage and bring those responsible to justice… although, according to news reports, he has no idea who his lady-friend in the video is, since he claims to have bedded a vast pool of women after his split with ex-wife Linda in 2007.

“During that time, I don’t even remember people’s names, much less girls,” Hogan reportedly told TMZ. Well, scrapbooking is such an under-appreciated skill — it could have curbed this issue quite easily.

We hope that Hogan will be able to dive into the depths of his subconscious, walk down Memory Lane and identify the woman in the video, so the footage can be destroyed before it wreaks havoc upon the world!