Although discussing the actress’s leg is equally important, Angelina Jolie shed some light on the current obstacles faced by Somali refugees at a summit in New York. 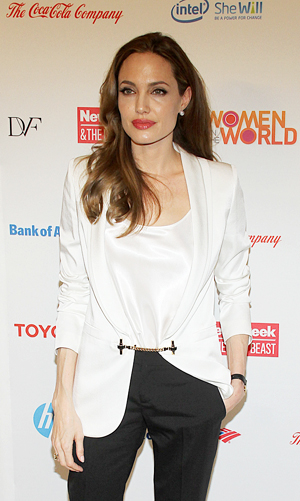 Angelina Jolie stepped out — sans naked leg — as a United Nations Goodwill Ambassador and working with the United Nations High Commission for Refugees to speak on behalf of Somali refugees at the Women in the World summit in New York City.

She was welcomed on stage by Sandra Uwiringiyimana — a teenaged Rwandan genocide survivor — who thanked Jolie for “taking justice into her home and hands.” The warm introduction clearly touched the actress, who clutched her heart before ascending to the stage.

Jolie shared a story of Dr. Hawa Abdi, an obstetrician and gynecologist who, with the help of her two medically-trained daughters, has been running a clinic and safe haven for Somali refugees since 1983. Dr. Abdi’s work “illuminates the nightmare of tens of millions around the world,” stated Jolie, “the internally displaced and the ones homeless within their homelands.”

But Dr. Abdi has been facing several challenges in the past 11 months: a famine, the huge influx of refugees, medical staff nearly abandoning her due to lack of funds, a pneumonia epidemic and now, rebel militants attempting to claim the camp land for their own.

“It is, right now, Friday morning in Somalia,” Jolie stated. “In a few hours, 400 human beings are about to become, once again, displaced.”

The very real and grim news was slightly alleviated by the announcement that Dr. Hawa Abdi has been nominated for a Nobel Peace Prize, which will hopefully allow her to “empower economically Somali women and give a home for homeless people.”