Everybody’s falling head-over-heels for Kate Moss, or vice-versa. A billboard of the super-model toppled over in London, hurting four people. 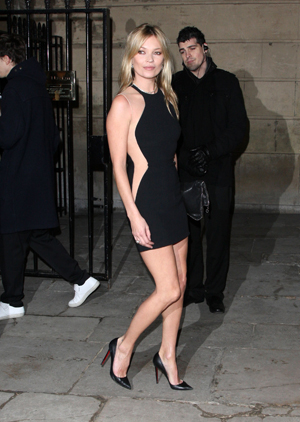 What a cruel fate it would be if the last thing you ever saw on this good Earth was a ten-foot Kate Moss — looking all kinds of foooine — tumbling on top of you.

Luckily, that was nobody’s tragic end, although probably a very traumatic experience when a billboard featuring the model collapsed onto four pedestrians in London.

According to BBC, three women and one man were hurt in the incident. Somehow, the enormous Mango ad featuring Kate Moss came loose and landed atop the four victims while they were walking down Oxford Street.

The spokesperson for the London Fire Brigade stated that “three fire engines, four fire rescue units and around 40 firefighters [were] at the scene. The police and London Ambulance Service [were] also at the scene.”

One victim reportedly suffered a back injury, while the rest sustained only minor injuries.

Well, it could have been worse…. That Kate Moss is a lively one; next time they’ll have to use model-proof bolts and screws to keep that puppy steady.

We wish all the best to the victims of the incident. Godspeed!