It was bound to happen. Although rumours have been flying like crazy already, Snooki finally confirmed her pregnancy. Le gasp. 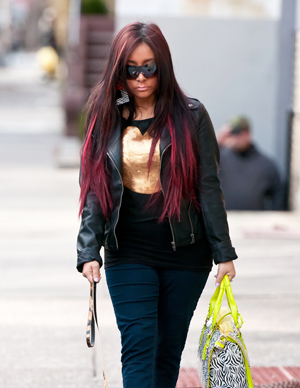 So, the chitty chat-chat on the street is that Snooki indeed has a bun in the oven. In other words, the end is near… Naw, it ain’t that bad, right? Right?!

The Jersey Shore home-girl confirmed to Us Weekly that she is preggos with fiance Jionni LaValle’s child and that the couple is ready for parenthood.

“I have different priorities now. I don’t care what anybody else thinks. As long as I know I’m ready and he’s ready,” Snooks told Us.

And LaValle chimed in, stating, “We are not going to screw this up.” Well, with assurances like that, nothing can possibly go wrong…

Although Snooki denied previous pregnancy rumours, the couple has actually known about it since New Year’s Eve.

“We found out right after New Year’s. My first thought was, ‘S**t, I’ve been drinking!’ I was worried. It was New Year’s Eve and we were in Vegas, so I did go crazy,” the petite reality show star confessed. Ay, bless her heart for honesty.

And while Snooki herself is roughly the height of an average toddler, we will place our faith in her and her parenting abilities. We will become SNOOKI-LIEVERS (Snooki + Believers): Go, team!