Although Nick Lachey is eager to be there during the birth of his first child with Vanessa Minnillo, he’ll have to keep to the north side of things…. 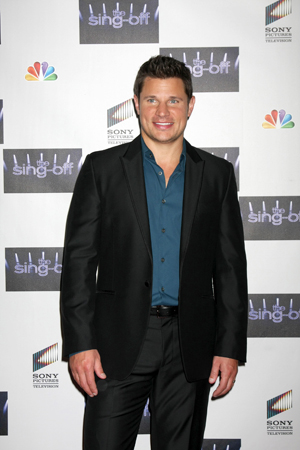 Everybody loves babies! Nick Lachey announched on Monday that he and his wife Vanessa Minnillo are expecting their first child together. Judging from the past few weeks, that appears to be a Hollywood trend… the population seems about to double!

The singer admitted that he wants to fully support his spouse in the delivery room, but he will not be getting up close and personal with the action down there during childbirth.

“I’ve been told — because that’s what happens now, I’m told things — that it’s going to be a waist-up situation, if you know what I mean.

“I’m gonna be there, I’m gonna be supportively there, holding hands, and coaching, breathing, all that good stuff. But apparently I won’t be down below, seeing what’s happening. I’ll be up above, helping.

“My work there is done! I was successful there. So we’ll keep it waist-up,” Lachey stated. Of course, it’s all about the eye contact, sweetie. Keep to the North.

Lachey’s surprising enthusiasm for involvement in the below-the-waist action should not be confused with simple inexperience (most men who’ve seen childbirth are not eager to witness it twice). Lachey actually filmed childbirth for a friend before, so he knows what’s what and has no problems beholding the miracle again. Alas, Vanessa is not so keen on it.

Well, we congratulate the parents-to-be and wish them all the luck! High-fives for babies!

40 Celebrities Who Have Posted Nude Photos (On Purpose)