Kids say the darndest things, don’t they? Miley Cyrus may be in hot water over a quotation that proved to be offensive to her loyal Christian followers. 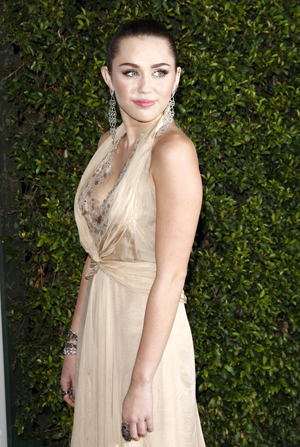 Miley Cyrus has learned the benefits and disadvantages of Twitter in the duration of her teenage life. Right now, for example, she’s feeling the cold, cruel rain of malevolence flooding her Twitter feed.

Ms. Cyrus unexpectedly tweeted a photo of the theoretical physicist Lawrence M. Krauss — who was raised in Canada; high-fives! — along with one of his famous quotations on the origins of matter; he believes the human body is composed of particles produced by destroyed stars.

“You are all stardust. You couldn’t be here if stars hadn’t exploded, because the elements (carbon, nitrogen, oxygen, all the things that matter for evolution) weren’t created at the beginning of time. They were created in stars. So forget Jesus. Stars died so you can live,” read the quotation Cyrus posted.

Now, the quote is all kinds of poetic, but — as you can imagine — the Jesus bit did not sit too well with some of Miley’s followers. Cue backlash.

“You seriously believe that crap? It’s so ridiculously stupid. Go to hell,” one lovely individual tweeted back.

And another replied, “So are you no longer a Christian? Forget Jesus??? Seriously? What has happened to you out there in the famous world? What????”

Cyrus has long been believed to be a dedicated Christian, but as she’s been growing older her religion appears to be a tossed salad of several various beliefs rolled into a single individual.

Miley has not replied to the negative feedback she received following her tweet. But evidently freedom of speech, thought or religion escapes Twitter, not to mention progress and wholesomeness.